Bulls Almost Out Of Time – Correct Could Be Imminent.

Bulls Almost Out Of Time – Correct Could Be Imminent. 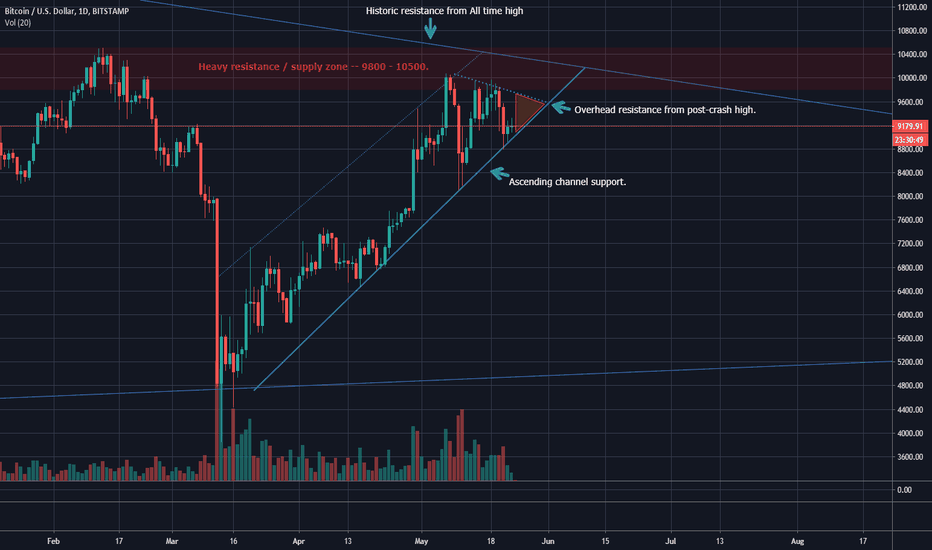 We briefly sat above the 10K price before bulls were unable to press the price further due to heavy selling pressure. Since then, several attempts have been made on the 10K region, with each successive attempt weaker and less convincing.

With each passing day, the support line creeps up higher and overhead resistance closes in above. The highlighted orange triangle is the time left for the bulls to mount a final assault on the 10K region (8 days at time of publishing, provided bulls can place continuous upward pressure on price). Presently, if we just trade sideways for two days at this price (9161 @ time of publishing), we will fall out of the post-crash channel that has been the foundation of this rally in two days. To continue to respect the channel and set up a base for a final push on 10K, 9500 has to be reclaimed ASAP to give bulls some extra breathing room.

Unfortunately, even reclaiming 9500 leaves bulls in the same predicament as before; having to reclaim the 10K region. Best case scenario for bulls right now is to flip overhead resistance from post crash high into support before attempting to continue higher. This would buy bulls around another fortnight in the channel. Lower support line of channel is now OVER 9K.

9K – has to be held by bulls to sustain ascending channel now.

8800 – main point of control. Large demand @ 8800 with a sizable buy wall on Binance. If ascending channel breaks down, this will be THE final line of defense for the bulls. If 8800 goes, I suspect price will quickly collapse.

My bias is bearish in the short/medium term. This pre-halving, FOMO rally off of a catastrophic 50% crash never looked sustainable. Bulls have had numerous chances to break above 10K. If whales and market makers were going to let retail thru I suspect we’d already be there. Additionally there was no consolidation and very few retests of lower support on the way up. I think it would be more sustainable in the long term to come down from this region of resistance now. Find support around the 6-7K region (or even much lower, although I’d be surprised if we stayed that low for long). Build a base and allow for some accumulation to take place. Then, after a few months, follow a similar path as the last post halving environment and start a slow and steady ascent.

Later in the year, overhead resistance from the ATH will be under 10K. The supply zone between 9800 – 10500 will probably not be as congested as now if larger players are ready to take the handbrake off of the price. Last halving, it took the price action 9 months to reclaim the previous ATH before retracing and continuing upwards. If we followed a similar trajectory, we could break 10K later this year and conceivably retest ATH in January/February 2021 and break into a new bull market and seek out new highs.

I do make allowances for the converse; if 10500 is broken any time soon, then the above is invalidated. I would still trade carefully if 10.5K were broken. Larger players know all eyes are on this region. It might be the perfect opportunity for some very large players to offload with little slippage due to manic FOMO. In any event, I suspect we’ll know which way we’re going in the medium term very shortly. Thank you for taking the time to read my rambling- hope it is of some use. Comments welcome. 🙂

* Es können alle ERC20 Token auf Ethereum Basis an diese Adresse gesendet werden. Vielen Dank für deine hilfreiche Unterstützung.
Do NOT follow this link or you will be banned from the site!